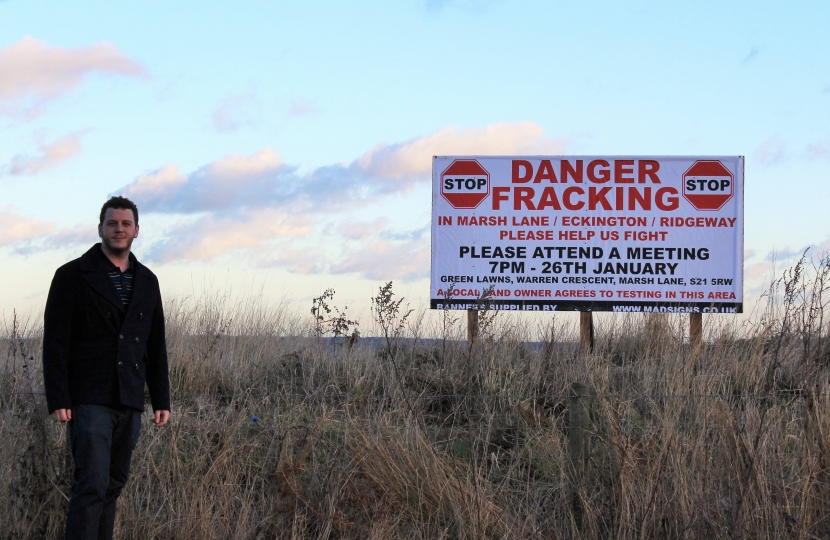 Local Dronfield Councillor, Alex Dale writes for conservativehome.com (published 30/07/18) on why fracking decisions must not be taken out of local hands and why the Government should scrap its latest proposals and reaffirm its commitment to localism:

Conservatives are a broad church, but even churches require planning.

I believe in localism. I believe it is a core tenet of Conservatism. I also believe in the benefits of a fit-for-purpose planning system, and I do not support making exceptions to these values. But that’s exactly what has been proposed for fracking by the Government.

My experience as a County Councillor is that most of the community from across the political and social spectrum have concerns with the proposed test drilling activities in our bit of beautiful rural Derbyshire.

It means I should take notice of the proposals being consulted on over the summer. The government intends to bring shale gas exploration – including big industrial developments such as test drilling – under the permitted development regime. This would mean fracking companies no longer have to apply for local planning permission to get drilling. They further propose lifting large production sites out of local decision-making and into the national planning process.

And there is an important connection between fracking applications submitted through the planning system and Local Plans; put together these changes remove local knowledge, locally elected representatives, and local people from decisions on an industry that could bring the most significant changes to the English countryside in a generation. If we trounce that connection, we risk fuelling mistrust between residents and those of us elected to represent their views because it chips away at local democracy.

This is all done in the name of ending delays that some consider unnecessary. But where other departments fail to meet legal guideline deadlines, outside bodies come in – why should it be any different for fracking applications?

Aside from the fact that a robust business should have built-in capacity to deal with some delays, recently proposed plans to warp-speed the process by removing what’s perceived as a nuisance blocker, that is, considering local people’s views, is far from the right way to go about doing things. Just the other week, a report by the Housing, Communities and Local Government Committee said there was minimal evidencethese proposals would speed up the planning process.

The government seem intent on proving that fracking is a special case, deserving special consideration – nothing short of teacher’s-pet treatment where the industry is given a free pass not to abide by the usual rules. I don’t see the case for that. If it is an issue of national importance then more consultation and time is needed for the local planning process, not less. If resources are an issue, assign adequate levels of support.

We need to step back and consider the process, the application, the industry, and its impact as a whole because we are, in the fulsome and meaningful sense, custodians of our bit of England’s pleasant pastures.

Rightly proud of our heritage (which I unashamedly consider matchless) we are tasked with a civic duty to uphold and defend our collective, natural inheritance.  We do this often and in sometimes unspoken and unexciting ways, for example, through our planning system. Flawless it is not, but it has an important job to do.

One of its jobs is to minimise visual impacts and when it comes to fracking, predominantly affecting rural locations, modest impact claims are not entirely convincing. It’s all very well for fracking exponents to cite graphics showing that the Eiffel tower is actually larger than a drill rig and nobody wanted to see Paris’ skyline change at the time or something, but there is such a thing as cumulative impact.

Harry Phibbs recently wrote in favour of fracking, as is his right of course, but he uses one estimate from the industry trade body of the number of wells required. He failed to mention that the 400 well pads referenced would require a massive 4,000 individual wells between them. That’s cumulative impact.

More recent research from Cardiff University estimates these cumulative impacts to be even more severe, with over 6,000 wells required to replace half of gas imports, on over 1,000 individual sites spread across our countryside. With the government clear that our gas supplies are secure into the future we have a clear choice as a country as to whether or not the cumulative impacts of fracking are too high a price to pay for more home-grown gas.

I’m just not convinced that this is what anyone wants. With drilling rigs, concrete drilling platforms and thousands of HGVs needed for every single site, taken as a whole – and that is how we are supposed to consider these things – the industry is poised to significantly alter the character of large swathes of our beautiful countryside. I don’t subscribe to the preserved in aspic approach to rural England, but I do very much think that we have a duty to preserve what is good, protect what needs protecting, and ensure we have a thriving countryside where people can live, work, raise a family and, most importantly, enjoy it.

It’s why the expertise and knowledge to make the right decisions at a local level is held by mineral planning authorities. They are best placed to judge the impacts of fracking, not Whitehall civil servants or ministers.

For me there is a reality that we can ignore but only at great electoral risk: there are around 170 English constituencies which include oil and gas exploration licences, of which almost 90 are Conservative held. The residents we represent deserve input. Otherwise it might just be the difference between how many of those 90 we return at the next election. Localism matters. People must be heard, or they have a unique way of letting us know.

As a councillor, I’m doing my duty and representing my constituents. Under the new proposals it would be impossible for me to do that. And impossible for my constituents to have a say over whether a similar development gets built in the future. That’s not localism; it’s not Conservatism, and it’s not doing the best by those who have elected us.