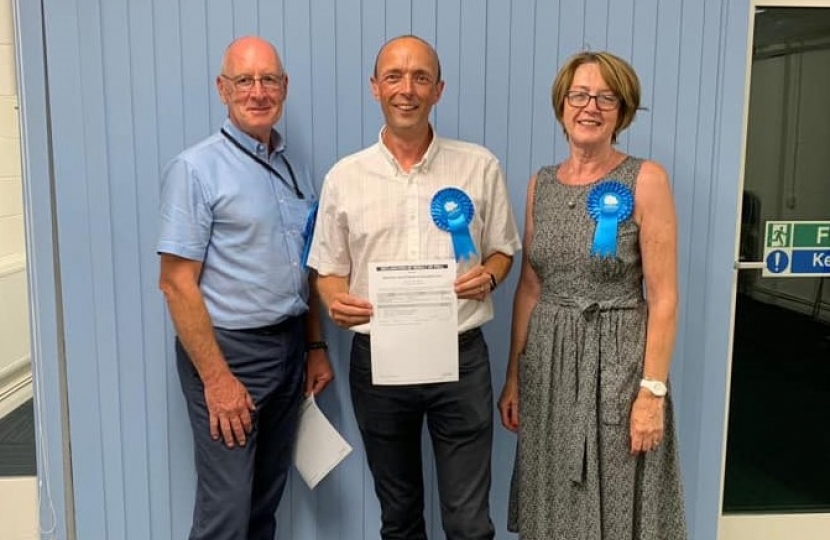 Local Conservatives are celebrating what they say is “another historic victory” in a by-election on Thursday (25th July), which saw local resident Neil Yewman elected as a new Parish Councillor for Clowne West.

Neil, who lives with his family on Ridgeway West in Clowne, had stood for the seat in the local elections in May, but narrowly lost out by just 11 votes to Labour. However, the new Labour Councillor Jim Smith did not take his seat and instead resigned from Clowne Parish Council before its first meeting began.

A by-election was then called in which Labour surprisingly did not field a candidate. Neil fought an active campaign, focusing on the issues of overdevelopment and speeding, ultimately seeing off stiff competition from Lib Dem and Independent opponents to secure 50% of the vote.

Commenting, Cllr Yewman said: “I’d like to thank local residents for coming out on a hot evening and putting your faith in me at the ballot box. It’s an absolute honour to have been elected as your parish councillor for Clowne West.

“I will continue working hard as promised to ensure that I am your voice in the council for the things that matter the most to you.”

Chairman of North Derbyshire Conservatives, Alex Dale added: “Many congratulations to Neil on a very well-deserved victory and thanks to everyone who took the time to go out and vote Conservative. This historic victory follows on from a number of similar by-election successes in former Labour heartlands like Eckington and Killamarsh last year, as well as our excellent achievements in May, taking control of North East Derbyshire District Council for the first time ever and returning two Conservative Councillors to Bolsover District Council for the first time since 1987.

“Neil will join Councillors David and Maxine Dixon who already serve on Clowne Parish Council and I know the three of them will make an excellent, hardworking Conservative team for local residents.”

The results in full were:

Pictured: Cllr Neil Yewman at the counting of the votes shortly after his election, flanked by existing Cllrs David and Maxine Dixon.

Tell us what you think on rural issues in Barlow, Holmesfield and Millthorpe

On 9th September, residents across Barlow and Holmesfield Ward will go to the polls to elect a new District Councillor, following the resignation of Councillor Carol Huckerby earlier this year.