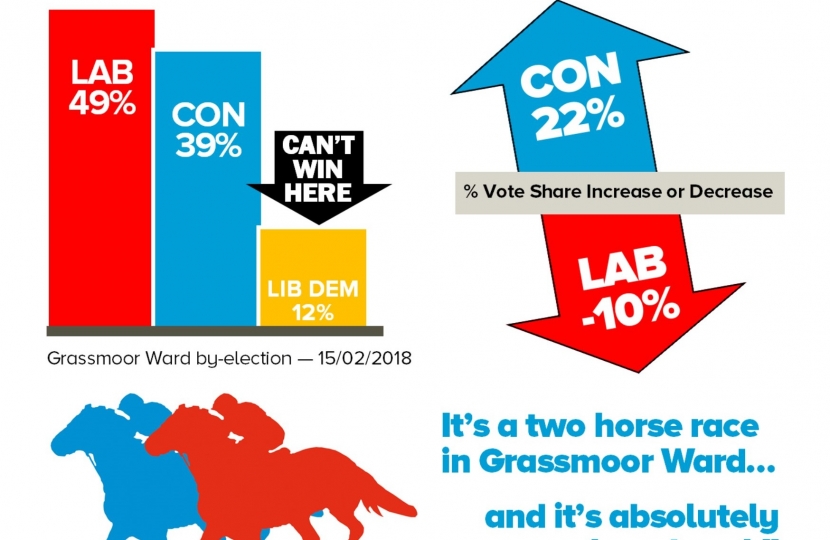 Shockwaves were felt last night as the Conservatives came within just 91 votes of winning a District Council by-election in Grassmoor Ward, which has historically always been a Labour stronghold.

Conservative candidate and Durham Avenue resident, Josh Broadhurst, achieved an increase in the vote share of 22%.

Labour struggled to hang onto the seat with a 9% collapse in their share of the vote. Meanwhile, the Lib Dems came a very distant third with less than 12% of the vote.

Commenting, Josh Broadhurst said: “I was absolutely delighted with the really positive response I received to my campaign out on the doorsteps over the past few weeks. From the bottom of my heart, I want to thank everyone who took the time to vote for me and for lending me their support in this crucial by-election.

“I’m really proud of the positive campaign my team and I fought, which focused on fixing local issues to help improve all our villages. Labour have taken this area for granted for far too long and yesterday’s result shows that local people won’t stand for it anymore.”

Lee Rowley, North East Derbyshire’s Conservative MP, added: “Huge congratulations to Josh for coming so close in yesterday’s by-election and for the fantastic campaign he ran. The times really are changing in North East Derbyshire and our result yesterday is evidence of the seismic shifts taking place.”

Pictured: Josh Broadhurst (centre right) with his campaign team shortly after the declaration of the result.